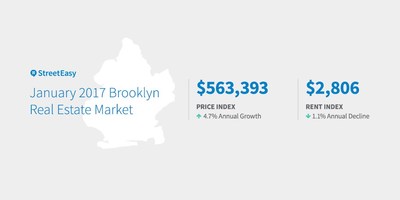 The Manhattan and Brooklyn rental markets began the year growing at their slowest annual pace on StreetEasy recordi, and both boroughs showed consecutive months of rent declines, according to the January 2017 StreetEasy® Market Reportsii.

This January, Brooklyn median rent decreased by 1.1 percent compared to January 2016. This was the greatest year-over-year rent decline since October 2010, and the first time rent declines have been recorded at the start of a year since January 2010.

"Manhattan and Brooklyn renters could finally be catching a break in 2017," said StreetEasy economist Krishna Rao. "Over almost a decade, rents in both boroughs have had strong growth and consistently hit new highs time and time again. Over the last few months the landscape has shifted. The luxury decline seems to be affecting the market in a big way, as the most expensive areas have seen the greatest rent declines, while competition has remained relatively heightened in less expensive areas like Upper Manhattan and South Brooklyn."

In the for-sale market, median resale price in Manhattan increased 0.8 percent year-over-year to $985,521iv. Upper Manhattan had the greatest price growth, increasing 8.7 percent to $673,009, while Midtown was a distant second with 0.9 percent growth to $853,804. Resale prices in the remaining submarkets – the Upper East Side, Upper West Side and Downtown - all declined compared to this time last year.

The complete StreetEasy Market Reports for Manhattan and Brooklyn with additional analysis, neighborhood data and graphics can be viewed at streeteasy.com/blog/market-reports.

i StreetEasy records showing year-over-year and month-over-month change of rent indices date back to 2009.
ii The StreetEasy Market Reports are a monthly overview of the Manhattan and Brooklyn sales and rental markets. Every three months, a quarterly analysis is published. The report data is aggregated from public recorded sales and listings data from real estate brokerages that provide comprehensive coverage of Manhattan and Brooklyn, with most metrics dating back to 1995 in Manhattan and 2005 in Brooklyn. The reports are compiled by the StreetEasy Research team. For more information, visit http://streeteasy.com/blog/market-reports/. StreetEasy tracks data for all five boroughs within New York City, but currently only produces reports for Manhattan and Brooklyn.
iii Median rent is measure by the StreetEasy Rent Indices, which are monthly indicies that rack changes in rent within all housing types using a similar repeat-sales method as the StreetEasy Price Indices. Median rent price change is monitored between all rental pairs in a given geography. Full methodology here: http://streeteasy.com/blog/methodology-streeteasy-rent-indices/
iv Median resale price is measured by the StreetEasy Price Indices. Also referred to as the StreetEasy Manhattan Price Index (MPI) and StreetEasy Brooklyn Price Index (BPI), the metrics are monthly indices that track changes in resale prices of condo, co-op, and townhouse units. Each index uses a repeat-sales method of comparing the sales prices of the same properties since January 1995 in Manhattan and January 2005 in Brooklyn. Given this methodology, each index accurately captures the change in home prices by controlling for the varying composition of homes sold in a given month. Data on sales of homes is sourced from the New York City Department of Finance. Full methodology here: http://streeteasy.com/blog/methodology-streeteasy-price-indices/ 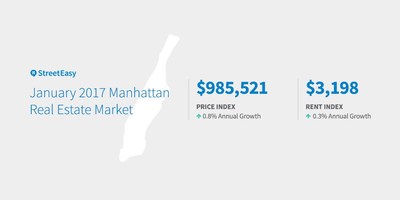