Rents Have Increased Twice as Fast as Wages in New York City Since 2010
Median wages in NYC increased 1.8% annually since 2010, while rents rose at more than twice that rate over the same period, according to StreetEasy's annual rent affordability report
Continue Reading 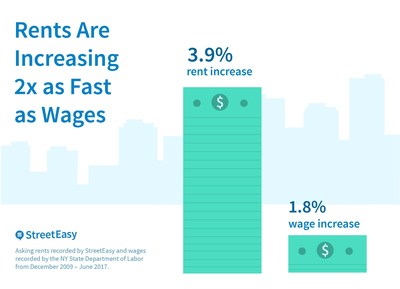 Despite rents rising over the past year at their slowest pace since the end of the recession, rent growth in New York City has continued to outpace wage growth, increasing the financial burden on New York City renters.

According to the latest StreetEasy rent affordability reporti, rent increases are outpacing income gains in New York City by a factor of two to one. This growing rent-to-wage disparity has the most severe effect on the city's lowest earners, who face greater affordability challenges than any other segment of the working population. In New York City, rents have increased by 33 percent since 2010, an average of 3.9 percent per yearii. On the other hand, median wages have increased by 1.8 percent annually since 2010 – half the pace of rentsiii.

"New York City residents who are earning the least amount of money are experiencing the greatest competition for housing and the steepest rent increases," said StreetEasy Senior Economist Grant Long. "As New Yorkers – particularly the lowest earners – are forced to dedicate more of their monthly income toward rent, it becomes extremely difficult to save for necessities like healthcare and education, or a down payment on a home. The city needs to focus on policies that can contain the pace of rent growth and develop much-needed skills in the local workforce to ensure every New Yorker can equally benefit from our growing economy."

The complete StreetEasy rent affordability report with additional analysis and graphics can be viewed at  http://streeteasy.com/blog/nyc-rent-affordability-2017/.

i StreetEasy's rent affordability report is an annual report that examines the current state of rent affordability in New York City. The 2017 report compared the StreetEasy Rent Index to wages as reported by the NYC Department of Labor between 2010 and 2017, and analyzed how growth in different price tiers changed over time. NYC data includes all five boroughs.
ii At StreetEasy, we track the evolution of rents through our StreetEasy Rent Index, which we report across boroughs, and across submarkets and price tiers within boroughs. For the purposes of this analysis, we calculated a single rent index covering all of New York City. For a discussion of the methodology underlying StreetEasy's index calculations, see here.
iii Wage data sourced from NYC Department of Labor.
iv For the purpose of this report, StreetEasy segmented city-wide wages and apartment rents into five price tiers.
v As measured by the consumer price index (CPI). Source: U.S. Bureau of Labor Statistics.